Butter Alchemy for a Paleo Diet 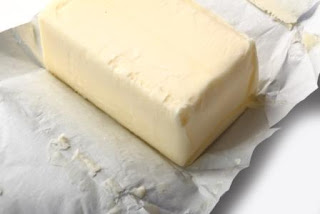 Do you remember making butter as a child?  It was like magic pouring the "top of the milk" into the jam jar, screwing tight the lid and then shaking, hard for what seemed like an age til suddenly there in the jar amongst the milky liquid was a piece of butter which appeared to have made itself!

There are lots of ways to make butter.

I like this from Alexandre Dumas (from Dumas on Food translated by Alan and Jane Davidson, London Folio Society 1978 )

"In a few countries where I have travelled, I have always had freshly made butter, made on the day itself.  Here for the benefit of travellers is my recipe; it is very simple and at the same time fool proof.  Wherever I could find cow’s or camel's milk, mare's milk, goat’s milk particularly goat's milk, I got some.  I filled a bottle three quarters full, I stoppered it and hung it around the neck of my horse.  I left the rest up to my horse.  In the evening when I arrived, I broke the neck of the bottle and found, within, a piece of butter the size of a fist which had virtually made itself.."

I still don’t fully understand the transformation process, its like alchemy but I do know that humans have been eating butter for a very long time.  Traces of butter fat found on pottery fragments have been dated to 4000 BC, proving humans have been eating butter for at least 6000 years. Strange that, as if butter (fat) did really cause an increase in adipose tissue, we would expect to see the current obesity epidemic starting around this time. And yet we don't..why is that? Well it's because it's simply untrue. Butter does not make us fat, in fact as well as making us happy, there are many other health benefits of eating Butter.

But don't worry for this recipe, you won’t need a horse or mare's milk for that matter (er unless………)

Use a stand mixer to do the work.  You will need about 2 cups of high-fat whipping cream.  Pour this into the bowl and let it warm up a little.  Whip the cream on medium-low and watch as it begins to break down and separate into a milky liquid with chunks of fat collecting on the whisk.  Be patient, this can take upwards of ten minutes……

Collect the solids and place them in muslin or a sieve with a fine mesh and then pour the remaining liquid through the sieve.  This is buttermilk and you can drink it.  Rinse the butter pieces in the sieve under the tap to remove any remaining whey then squeeze the butter between your hands to remove the excess water.

Make the butter into butter pats or shape as you wish, wrap and store in the fridge.  It will keep for up to a week.

Very interesting subject, thank you for putting up'''