"The Men Who Made us Fat" 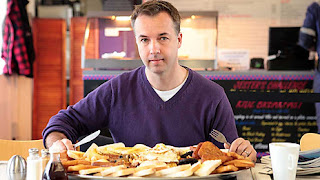 Can you tell what it is yet?

Perhaps the closest the BBC will come to endorsing a real food diet?

We are referring to the “The men who made us fat” which aired on BBC2 last night at 9pm.  Worth a look not least because the show brings together Robert Lustig, Gary Taubes, David Kessler, Phillip James and Dr John Yudkin to explore why we are getting fat.

And we are: two thirds of British adults are overweight and one in four is classified as obese.  The average person in Britain is three stone heavier than they were 50 years go.  What happened?  Jacques Peretti puts forward his view, creating a hit list ranging from Earl Butz, high fructose corn syrup, Ancel Keys, advertising campaigns driving snacking between meal (a finger of fudge anyone) and the rise of fast food restaurants.

So it would seem that decisions made in America 40 years ago continue to influence the way we eat now and continue to have a profound impact on our weight.  Take High Fructose Corn Syrup (HFCS).  The sweetener was promoted in the US in the 1970s by Richard Nixon’s agriculture secretary, Earl Butz to make use of the excess corn grown by farmers.  Cheaper and sweeter than sugar and created by industrial process, it soon found its way into all processed food and soft drinks.  There was a vivid shot in the programme of Peretti eating a burger and chips and demonstrating that the beef in the burger was made from cattle eating corn (natural – I think not), the bread was made with corn syrup, the fries were cooked in corn oil, the ketchup as made with corn syrup and the fizzy drink was made with corn syrup – did you know that?  It makes you feel a bit queasy, doesn’t it?

Did you also know that HFCS is much sweeter than sugar but that does not mean less is used in the production of food.  Why?  Because HFCS also interferes with leptin, the hormone that controls appetite so once you start eating and drinking you don’t know when to stop.  That signal to the brain has gone as a result of consuming this product  Bad news for you and me…great news for food manufacturers!

Meanwhile a US Congress Report blames fat not sugar for the disturbing rise in heart disease.  Dietary guidelines are established and low fat foods are invented with the food industry purveying a range of “low fat” heart healthy” products with all the fat removed…trouble was without fat the food tastes like cardboard – solution, replace fat with sugar.  Genius! Trouble is we don’t realize that low fat does not mean it’s not fattening!  It’s all about the insulin and you know, as Peretti says “while obesity has boomed so have profits”

Want to know how important the sugar industry is in America?  Listen to Peretti’s final story.  In 2003, we were preparing to invade Iraq.  In America there was another battle on – only this time against…the World Health Organisation.  They were about to publish a report to set world-wide limits on the consumption of sugar.  That is until the Sugar Association wrote to the WHO, threatening $406 million dollars of US funding would be withdrawn if the publication went ahead.  The US Health Secretary even  travelled to Geneva to put the case and do you know something, that recommendation was never made.  Makes you think doesn’t it?

Final comments?   Next time programme-makers please reduce the repeated shots of obese people wandering around in” leisure wear” and perhaps you could think carefully about juxtaposing commentary on the rise of obesity encouraged by the large number of fast food outlets and the fact that virtually every interview was held in a fast food restaurant!

Take a look and send us your thoughts.  And if you are looking to start a real food diet, give us a call…..


...It may be Paleo Works is just the thing,

you need to get started!

Loved this Programme last night! could not believe that this may have gone unnoticed by people being put on bbc2 whilst the football was on which probably would have had a good proportion of people drinking alcohol, fizzy drinks and eating crap whilst watching it (sweeping generalisation) Nice summery. Recommended this to alot of our members to watch so they can see the reasons why we say to cut certain things out of their diet (Paleo esk). Scotty http://prime-mover.co.uk/