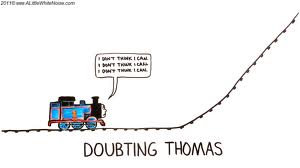 Doubt has a way of intruding into every area of our lives.

We get a very clear and powerful insight ..and then a day later doubt our self.  Something really good happens and we doubt we deserve it or we stumble across a site that is telling us “how to diet in the modern world”, how life can be simpler, deeper, fuller and we really get it ..but hours later we doubt we can put theory into practice and the opportunity is lost.

Sound familiar?
So what’s happening?
Where does this doubt come from and what can we do to change it?

Doubt comes from the mind.  It’s like a growling watchdog trained to protect us.  Doubt brings back bad memories of past events and scares us from moving “out the box” for fear of rejection, failure or ridicule (because may be that’s what happened before).  It is acting like an invisible fence, boxing in our dreams for a fit and healthy life, for weight loss, fat loss or recovery.

Why is this happening?

It’s a question of evolution.  Humans evolved to make sense of things.  And the most efficient way to do this is to filter experience through what has gone before.  That’s all.  But in this way we are only responding not choosing.  And we are bigger than that!

Viktor Frankl was a Jewish psychiatrist who spent three years during World War II living in several of the most notorious concentration camps.  While imprisoned under impossible circumstances he realised that he had only one single freedom left: he had the power to determine his response to the horror he saw unfolding around him.   So he chose to imagine.  He remembered his wife and imagined the prospect of seeing her again, he saw himself teaching students after the war and he did indeed survive and went on to write a book about his experiences.  “A human being is a deciding being” he wrote in his book “Man’s Search for Meaning” “Between stimulus and response there is a space.  In that space is our power to choose our response.  In our response lies our growth and our freedom”

The creation of a new reality for us begins with the question “why”.  As soon as we ask this question we open up to the possibility of change.  For example, why, after everything I have done, am I still fat?  Why do I always see myself fail?

Answer because we perceive/remember/understand/are reminded internally that this happened before.  Remember..human beings evolved to make sense of things and the most efficient way to do this is to filter experience through what has gone before.  But we give our minds too much power, it’s only a thought - we don't know what is going to happen in the future and we can't change what went before but every moment we enter we can make a different choice...

By becoming aware of our mind-sets and perceptions we can create breakthrough.  Doubt is only mental programming.  It is a like our television set has been tuned to only play old horror movies over and over.  Don’t battle it.  That’s like feeding the monster.  The moment we try to defeat doubt we enter an exhausting battle.  The mind is where doubt flourishes, it’s doubt’s training ground and is embellished with a long list of successes.  And don’t try and argue with doubt either because the moment you try to rationalise or apply logic to doubt, it’s won..check mate, game over ( again)!

Like Viktor Frankl says, you have to imagine beyond your perception of reality.  And yes yes, yes, you will still hear doubt roaring in the background, trying to scare you into giving up….listen to the howl, if you like for a while then move on and you will hear it quieten, every time you take a step forward into your new life experiences.

If doubt feels very present for you right now it’s because you are ready to ask “why” and ready to make change happen.

And however you wish to play it,  we wish you well!

P.S. Need more convincing?  Try this TED talk with Beau Lotto entitled "The Power of Perceptions: imagining the reality you want"and see what he has to say about perception...the way we perceive even the most basic of our senses is dependent on interpretation.